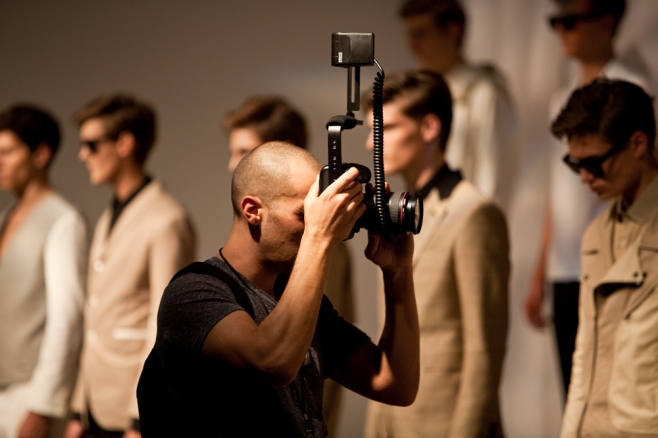 [above: Eli Schmidt composing some solid shots at NYFW]

Now that we have a solid understanding of the interaction between the settings affecting exposure, let’s move onto composition. We will start by learning about the rule of thirds, negative space, and framing. Then finish up chatting a bit more about how depth of field and focal length can be manipulated to create different effects.

The rule of thirds is just an articulation of something that most people tend to do naturally anyway. That is, to try to create balance through symmetry or asymmetry when framing up a shot. The rule of thirds says: “an image should be imagined as divided into nine equal parts by two equally-spaced horizontal lines and two equally-spaced vertical lines, and that important compositional elements should be placed along these lines or their intersections.”

To illustrate this concept, here is an animated GIF that I borrowed from Wikipedia  under cc license. Notice how the horizon tracks the bottom horizontal divider almost exactly. The tree trunk does the same with the right hand vertical dividing line.

Creating balance in composition is, in my opinion, the element that allows an image to convey purpose. Squaring up the subject directly in the center of a portrait is the most distilled example of this. There is no doubt that people will read loud and clear what is meant to be seen in the image. There are obviously more ways to do this than centering the subject. The rule of thirds is a guideline that can help retain aesthetics when we are getting creative with composition. All of this is not to say that centering the subject and using the rule of thirds are the only two options for making an interesting composition. They are just some tools that can help us, especially when we are trying to explore what our personal compositional style is. 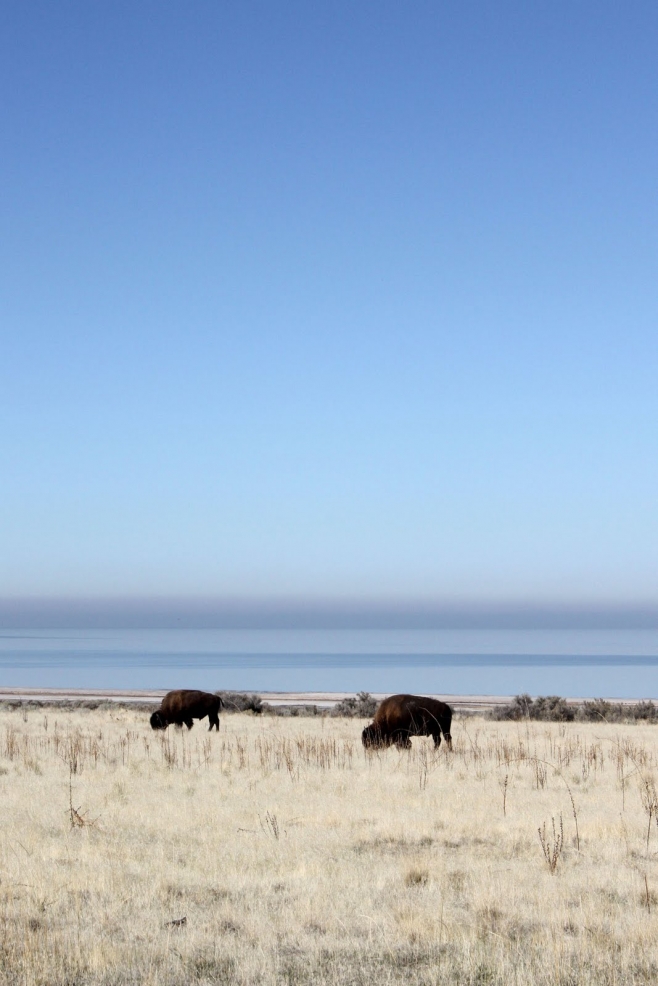 The example above was shot by my cousin Tif, on Antelope Island. It is a fantastic example of how negative space is used to draw attention to the subject. Plus, who isn’t a sucker for a gorgeous gradient blue sky? Negative space doesn’t always have to be empty.

In this case, we aren’t referring to the type of framing that is done after getting such an amazing shot, that we print it and stick it in a frame on the wall. Instead, we are referring to framing subjects within the composition, that draw attention to the subject. The example below is from the Quikpro surf competition a few weeks ago. Notice how the surfer is wedged nicely between the heads of the two bikini clad onlookers. 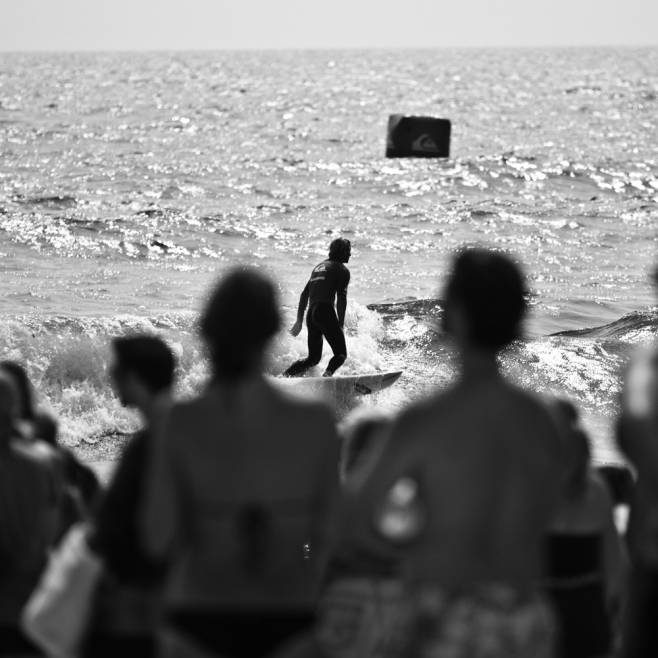 Ok, lets wrap things up discussing depth of field and focal length. As usual, I had planned to shoot a set of images specifically to demonstrate this point, but haven’t found the time. I think that I will probably talk Sam into doing a tutorial with me on this point. Depth of field is another compositional tools that can be used to draw attention to the subject. The image below is a great example of this. 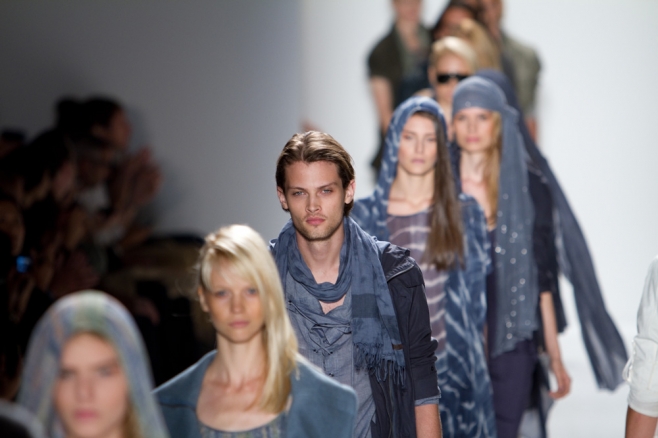 To achieve this effect, shoot in either aperture priority mode (AV for Canon), or if we are feeling confident about being able to adjust shutter speed and ISO for correct exposure, use manual mode. Set the f-stop to a low number, like f/4 or lower (note that depending on what lens is being used, f/4 might be the lowest). Ideally it is nice to be using either a prime lens, or a zoom with a constant aperture. What do I mean by that? A lot of zoom lenses have a variable maximum aperture setting depending on focal length (how far the lens is zoomed in or out). So, to eliminate some frustration from experimenting with depth of field, using a prime lens is probably the safest way to go. If you don’t have a prime, I recommend for Canon users purchasing the 50mm f/1.8. It is under $150.

Ok, now that we are in aperture variable or manual mode, let’s change our AF screen so that we only have a single point in the center of view finder. For Canon users, this is done by using the button at the top right of the back of the camera with the icon that looks kind of like a checker board. Click through here for instructions with Nikon. That will allow us to focus on a specific point, and not allow the camera to decide for us. Finally, change the AF mode to “one shot” or the Nikon equiv. We are ready to go.

As a general rule of thumb, here are the basics to remember–

Let’s play out a quick scenario: We are shooting some portraits using a 50mm lens, trying to play up the shallow depth of field, the aperture is wide open. But, the photos are crap because only the end of the subject’s nose is in focus. What are the options? Option 1— close down the aperture a bit (choose a higher f-stop number). But, we don’t want to choose a higher f-stop because it is low lighting and we can’t afford to use a slower shutter speed or boost the ISO because it will cause camera shake or unwanted noise. Ok, let’s try Option 2— back away from the subject until the depth of field increases enough to have the subject’s entire face in focus. But, we don’t want to back away too far, because it throws off the desired composition by having all of that distracting stuff in the periphery. No worries, we can go with Option 3— let’s get rid of the 50mm and use a 100mm instead. Now we can back away far enough to have the whole face in focus, but still have the composition tightly cropped on the subject. Hey, I think that I just scripted out the next tutorial. Hehe.

Homework– experiment with composition using the rule of thirds, negative space or framing.

Extra credit– Combine one of the homework techniques in the line above with a depth of field effect.

Now get out and shoot!