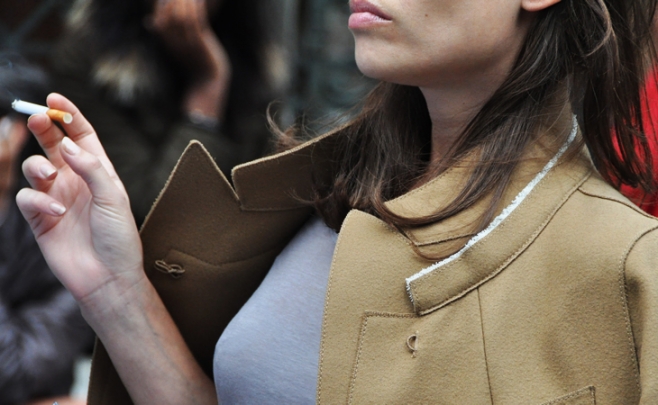 Since lately I haven’t really shot anything worth crap, I have to post other people’s images. The above snap belongs to none other than the infamous Tommy Ton, of Jak & Jil (among other things). The dude is hands down my favorite street style photographer. Unlike most of the street dudes in NYC, I have only ever seen Tommy once in real life. Not like it is a competition, but I think that Tommy’s flavor kills Schuman. Plus, Tommy isn’t a pompous, self-absorbed douche. Not sure how this post became about street style photographers, but looks like we are going to be stuck with that for at least a few more sentences. I would have to say that my other favorite street style dude is William Yan. Besides being a friend of mine, I am a fan of William for the street wear flavor that he brings. Not only does William shoot crazy good street style, he is constantly involved in some new collaboration project with boss street wear fashion houses. I have loads of respect for him. All of these guys, of course, take a back seat the the OG Bill Cunningham. I’m sure that they would all agree with that statement (except for maybe Schuman, who probably thinks that he is much better than Bill).

Ok, so the image above is part of Tommy’s set from Paris FW. The reasons that I love it, are: A- the way it is cropped; B- the camel jacket; and, C- because of the cigarette. Have you ever noticed that there are certain places in the world where the two most prevalent objects in public view are sexy early 30s/late 20s humans and cigarettes? You know where I’m talking about–the West Village, Rio, etc.. Anyway, I have been a bit obsessed with shooting hot people smoking, for the past several months.  I also have a pinterest album of such images that I have come across. Yes, I just admitted that I have one of those P-word accounts. Add some winter clothes into the cut and I can barely contain myself. The funny part is that I can’t stand the smell of cigarette smoke. I hold my breath when I get stuck walking behind someone who has a lit butt. I didn’t say it made any sense.

Speaking of butt, my brother comes to town tomorrow morning. Last time he was here was during armory week. We spent the whole time hanging out and shooting art installations. I’m not sure what we will do this time around. No doubt something good will come up.